How to optimize cheese yield?

As mentioned in the previous blog post, in cheese production, one should always pay attention to the optimization of the yield. Therefore, the aim is to make the best possible use of milk, without wasting it during the various stages of the process. In optimizing the yield, equipment selections play a significant role.

The cutting phase is critical

The yield may be improved especially during the cutting phase of the cheese mass. In the cutting step of cheesemaking, the main component of cheese, or cheese mass, is cut into grains of even size. The yield is reduced significantly by the amount of cheese left uncut and cheese fines resulting from inaccurate cutting.

1) Use the whole cheese mass

First of all, the cutter should extend to cut as much as possible of the amount of cheese that is contained within the vat, because the uncut cheese cannot be utilized. If the cutter does not go right up to the edge of the vat, plenty of valuable cheese mass is left uncut at the edges of the vat.

The rounder and straighter the cheese vat in use is, the better. The cutter can then be so large that the gap between the cutter and the vat is only a few millimetres throughout the perimeter. The difference in the amount of wasted cheese in the cutting step is up to a hundred kilograms per vat, depending on the model. If it is calculated that vats are used three times a day year-round, then investing in the right vat provides will pay off quite quickly.

2) Reduce the amount of cheese fines

Secondly, with a high-quality cheese cutter, the cutting result is accurate, making the cheese grains as evenly sized as possible while minimizing the amount of cheese fines. The cheese fines consist of small particles that swim in the whey extracted from the cheese and then pass through the mould holes in the moulding process. Thus, the less cheese fines are produced, the better the yield of a cheesemaking factory.

The cutter in use essentially influences the amount of cheese fines. Many cheesemaking factories use wire cutters, which cut the cheese mass several times. In that case, each cutting cycle will produce more cheese fines. When selecting the cutter, one should only rely on a single-cut cutting knife that will make the best use of the cheese mass.

Additionally, the cheese mass may stick to the tools inside the vat. It helps if the tools, such as a cutter or mixer, do not rest in the cheese mass unnecessarily, but are only used when they need to do their job. 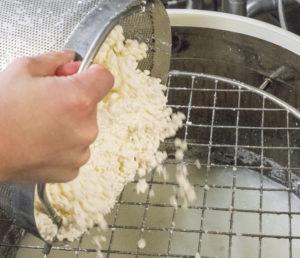 Do not waste the finished cheese in the moulding

If you extend the yield to the cheese that goes for sale, there are still more objects for optimization. In many cheese factories, for example, several kilos of finished cheese per vat is wasted in the moulding phase. The reason is an inaccurate moulding station. The law says that if the cheese on the store shelf is marked to weigh one kilogram, then it indeed must weigh at least one kilogram. Consumers must not be fooled.

If the moulding station is inaccurate, it is necessary to adjust the moulding settings so that the declared amount of grams of the produced cheese is met for certain. Because of inaccuracies, too many moulds are rejected, and almost every package of cheese has some extra cheese in it. However, with a precision moulding, the finished cheese can be fully exploited.

Read more in the free guide