Securing the dairy manufacturing process of the future

This article is a part of the CyberFactory#1 project with the focus on designing, developing, integrating and demonstrating a set of key enabling capabilities to foster optimization and resilience of the Factories of the Future (FoF). The project consists of 28 partners from seven countries, namely, Canada, Finland, France, Germany, Portugal, Spain, and Turkey. The work described here relates to the task “FoF resilience” located in the bottom right hand corner of the work package structure shown in the picture below. The task focuses on enabling the autonomous or decision-aided remediation and recovery of factory assets in the worst-case scenario, i.e., when an attack against the FoF or individual system within the factory is successful. The objective is to plan, model, simulate and practice the different ways for recovering the factory assets and selecting the most optimal way in terms of time and resources. This guarantees that when the worst-case scenario occurs, cybersecurity professionals can act immediately instead of losing valuable time while trying to figure out what to do in terms of attack mitigation and possible countermeasures. 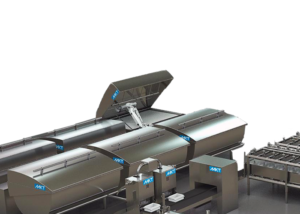 While the current cheese robot technology seems to be safe and secure, meaning that there are no killer cheese robots overthrowing the humanity at least yet, a malicious attacker with administrator access to the configuration could modify the cheese making process in its critical areas, affecting the quality of the product. The potential amount of damaged goods would be enormous, if the spoiled cheese was detected only after the cheese maturing process is over. This is because it might affect weeks or even months of cheese production and perhaps even endangering business continuity. In an organisation with insufficient real-time quality control, potentially hazardous cheese might end up in the market and in the worst case endanger consumer health.

The demonstrator shows that implementing a simple network behaviour monitoring system, a network attack can be detected even before the attacker gains access to the cheese production configuration system. While such systems are not fool proof, the capabilities for automated detection will deter the majority of attackers.