In 2015–2016, MKT delivered four modern cheese vats specifically designed for making blue cheese to Valio’s cheese dairy in Äänekoski. With these new vats, the dairy managed to improve the quality of its cheese and reduce wastage.

The most advanced cheese vat in the industry

Valio’s vats for blue cheese production began to reach the end of their life cycle a few years ago. The oldest vats from 1984 were technically no longer suited for modern day industrial cheese production, and even the design of the newer cheese vats that were being used, dated back to the past decades. In particular, Valio needed the new cheese vats to have an improved cutting quality. Valio made an extensive review of possible cheese production equipment suppliers, and ultimately reached a clear decision: MKT.

“We make AURA blue cheese by using vat technology, and based on our review, the cheese vat developed by MKT is the most advanced vat of its type. You could even say that many other manufacturers of blue cheese vats have a long way to go to reach this level,” says Master Fromager Jarmo Kelloniemi from Valio’s cheese dairy in Äänekoski.

The best cheese vats are created through collaboration

“For cheese making, it is important that the cheese vat’s features of cutting, stirring and ease of cleaning are top quality. We also wanted these traits to be part of our new cheese vats,” Kelloniemi says.

Due to this requirement, MKT and Valio worked in close cooperation to develop a cheese vat that is particularly suitable for making blue cheese. A cheese vat designed for cottage cheese production was used as a model for the new vat, scaled to suit blue cheese production. One of Valio’s vats was first acquired as a pilot, and based on the user experiences, the required changes were made to all four new vats.

“We were in constant dialogue with MKT, and together we managed to hone the vat cutter to match our needs exactly. In addition, we improved the vat’s stirring properties by changing the blades and optimising the stirring angle. All of our suggestions were taken into account at MKT, and the necessary modifications were made,” Kelloniemi says.

The result of this cooperation is a cheese vat that is perfectly suited to making blue cheese. The biggest difference to the old cheese vats that were in use is the fully automated cutting feature, which ensures that the cheese remains uniform and decreases the amount of cheese dust, i.e. wastage. 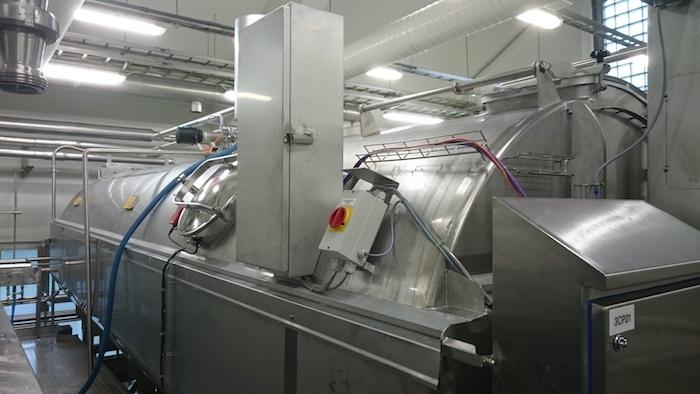 MKT praised for its operation

All of Valio’s AURA blue cheeses are made using MKT’s cheese vats, which means approximately a couple of million kilos of blue cheese each year.

“I am very pleased with MKT’s vat deliveries. We have reached our quality goals, meaning that we were able to make the vat perfectly suitable for our needs during its pilot phase. MKT was clearly committed to their deliveries, and the few problems we had with the new vats were quickly fixed in an amicable way,” Kelloniemi says.

“I can honestly recommend MKT’s vats to other fromagers in the cheese making industry, as well. And these new vats of ours, and particularly their knife cutters, have already attracted attention – after all, they are the leading edge in cheese vat design.”