In the spring of 2017, the Valio Äänekoski cheese dairy started its ultrasonic era: The ultrasonic washer manufactured by MKT is used to clean the moulds and salting boxes used for producing the world famous AURA blue cheese.

The Valio Äänekoski cheese dairy, which produces blue cheese, previously used a water jet washing machine to wash the cheese moulds. The machine was connected to a central washing unit that covered the entire system of production lines.

“We wanted to have a solution for washing the cheese moulds and salting boxes that would better suit our process”, says Jarmo Kelloniemi, a cheese expert from the Valio Äänekoski cheese dairy.

This way, the washing is performed more effectively, with less consumption of chemicals, and in a more environmentally friendly way.

According to Mr. Kelloniemi, Valio knew that integrating the new washer as a part of the production line called for special tailoring, and everything would not necessarily work out in the beginning as intended.

Because of this, they wanted the equipment supplier to be able to develop the washer in good cooperation even after delivery. This was known to be MKT’s strong suit.

“We had many offers on the table, but in the end the decision was made based especially on the cooperation aspect. And when we take into account the production, installation and other procedures, the comprehensive price-to-quality ratio offered by MKT was the best. In addition, we had seen a similar device manufactured by MKT and we knew that they could deliver us just the kind of washer that we needed”, says Mr. Kelloniemi. 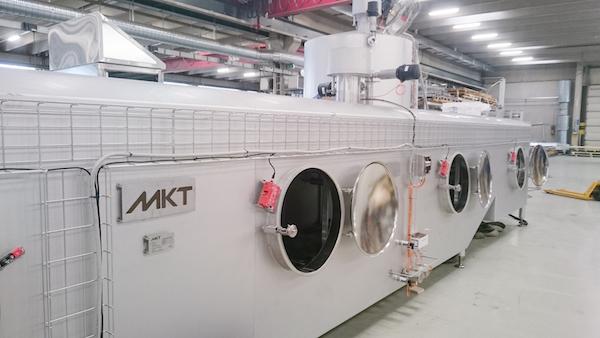 With MKT’s ultrasonic washing machine, the washing is performed more effectively, with less consumption of chemicals, and in a more environmentally friendly way.

MKT looks at the production line as a whole

Valio’s new ultrasonic washer is located on the line at the intersection of the moulding and salting processes, which means that both the moulds and salting boxes are easy to wash. The solution saves both space and time. However, this was not as easy as it seems.

“It is clear when the same washer is used for washing two objects that are of different shapes and sizes, the right adjustments must always be tried for a while, which was the case even now. In the beginning, there were some challenges in cleaning the salting boxes, but together with MKT we found the right solutions and had the washing process running like we wanted. In addition, we had other challenges along the cheese production line that had nothing to do with MKT. Still they helped us to fix them at the same time.”

“I can recommend MKT’s ultrasonic washer for others too, and I think that in the future ultrasonic technology will have a bigger role in cheese dairies, especially for washing cheese moulds”, Mr. Kelloniemi says.